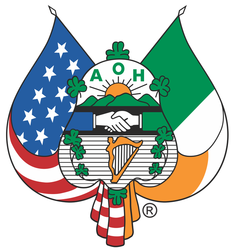 The Ancient Order of Hibernians is America’s oldest Irish Catholic Fraternal Organization founded concurrently in the coal-mining region of Pennsylvania and New York City in May,1836.  The AOH in America was founded at New York’s St. James Church initially to protect the clergy and churches from the violent American Nativists who attacked Irish Catholic immigrants and Church property.  At the same time the vast influx of Irish Immigrants fleeing Ireland’s Great Hunger in the late 1840’s, prompted a growth in many Irish societies in the USA – the largest of which was, and continues to be, the AOH.  Today the AOH exists in America, Canada, Ireland, England, Wales and Scotland, however, while the organizations share a common thread, the American AOH is a separate and much larger organization.
​

The AOH in America Today

​In America, the Division is the basic unit of the Order. Divisions are combined into County Boards, which are in turn governed by State Boards, and an overall National Board elected every two years. Annual dances, concerts, and parades sponsored at all levels of the Order raise millions for charity while providing a showcase for the positive contributions the Irish have made in every walk of American life. Here, the unique art, dance, music, and other interests of the Irish are fostered and preserved, making the AOH a home away from home for many. They are at the forefront of support for issues concerning the Irish such as Immigration Reform, MacBride Legislation, and the Right to Life. They never forget their ancestral homeland, and can always be found lobbying and working for the total independence of a united 32-county Ireland –– as their constitution avows: “by all means constitutional and lawful”.

Beyond the AOH national charter, PA Bucks County Division 5’s focus has always been to serve the area’s hungry, homeless and US veterans.  We have $0 fixed expenses; therefore, literally 100% of our fund-raising proceeds go to these societal initiatives.  Our largest fund-raising effort is focused on the continuity of our annual Golf Outing.

​Specific beneficiaries of our division’s efforts include Delaware Valley Veterans Home, Philadelphia Stand Down, HOPE101 and Advocates for the Hungry and Those In Need (AHTN).